He has changed the secondary packaging market by experimenting himself: Christopher Stuhlmann successfully dealt with the question of how containers can be packed differently than in plastic film. The resulting Nature MultiPack (NMP) is one of the most sustainable solutions ever for packs. 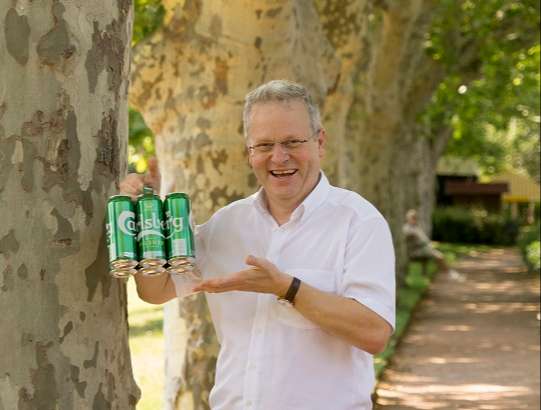 Something special must be happening if you spontaneously to go to the nearest hardware store to buy various adhesives then get a hold some different types of container (cans, PET bottles) and finally fiddle around with them at home trying to stick them together intelligently some way or another. And this is exactly what happened when Christopher Stuhlmann, then head of KHS' Packaging Technology Product Center came up with the idea for trend-setting, environmentally friendly packaging in the summer of 2011.

This was preceded by a visit to interpack, where he and his colleagues watched the competition as they made a media-attractive presentation of a new packaging tape designed to reduce packaging materials significantly. "My boss just asked: 'What's our answer to that?", said the 51-year-old mechanical engineer. And from that point on, evidently began to give it some serious thought - consciously, for example, while talking with customers and partners and sometimes unconsciously as during that eventful evening at home.

He had just made himself comfortable in front of the television after arriving home from work when "The idea with the glue dots suddenly occurred to me," says Christopher Stuhlmann. How about connecting containers together for the beverage, food and non-food industries with adhesive so that they stick together without any additional materials but can be easily pulled apart again without effort?

"At the time I was actually inspired by a conversation I had with Mr Göring, a manager of one of our good customers, who jokingly said that the best way would be to invent a kind of 'air hook' to connect the bottles," recalls Christopher Stuhlmann. This word eventually gave him the idea of small dabs of glue using almost as little material as air. "I then went to the hardware store and got all the adhesive I could find," says the current director of the Line Product Division - from the adhesive tape to superglue to a hot glue gun. He sat in the living room with these glues and experimented sticking the various container types and sizes (PET bottles, cans, etc.) together in the best way possible. "But it must be possible to easily separate the bottles again. That worked best with adhesive strips," he recalls. He recorded an "internal marketing video" as he called it in which he presented his idea and the results of his experiments and then showed the video to the technical director. He was enthusiastic and immediately spoke in favor of putting the idea into practice. "The bottles fell apart again one day after the living room experiment," says Christopher Stuhlmann and laughs. "But they stuck together long enough for the video." That was enough to meet their purpose.

In the following test phase, KHS cooperated with three different adhesive suppliers and experimented with 4,000 different adhesive mixtures until the results were really satisfactory. It took six years to develop the adhesive used today - and it is still not finished. Although the mixtures for PET and cans have been found for the most part, each of the other types of surface have to be re-tested.

NMP reduces the packaging material significantly by up to 90% and thus requires considerably less energy than film-wrapped containers. The carbon footprint is up to 70% smaller. The material savings of the groundbreaking innovation are also remarkable: while the traditional plastic film wrap weighs about 17 to 20 grams per PET six-pack, the Nature MultiPack™ requires only 1.5 to 2 grams of glue. Added to this is the environmental protection aspect: unlike film, the vegan adhesive does not break down into microplastics.

KHS has acquired Evian (Danone Group) as a key customer for NMP for PET bottles who is developing the product further jointly with KHS.
Carlsberg followed with cans in 2018 - giving KHS considerable attention in the media. Here, too, KHS relies on partnership-based cooperation: after a complete rollout, Carlsberg will be saving 60 million plastic bags a year by using NMP. As a result, consumers will become more familiar with this film-free system. "And ultimately it's the consumer who decides whether an innovation like this can be widely implemented and if something can be done for the environment," says Christopher Stuhlmann. He would have never dreamed what development his former living room experiments would bring about. And looking ahead to the future, there are yet many possibilities such as application of this system to other materials like glass, cardboard composite packaging and metal containers. "It's really something special to have participated in an innovation like this right from the start," he summarizes. And that is saying it rather modestly - after all, this innovation would not even have come about without his brainwave while watching television.

Awarded: NMP walks off with awards

The sustainable innovation has received numerous awards including the German Design Award 2016 for outstanding communication design and sustainable packaging solutions, the Green Packaging Award 2018 and the World Star for Packaging 2018. In 2019, NMP was also awarded gold as a "polite packaging".

By visiting sustainability.khs.com you agree to the Cookies. How we use cookies to improve our service: Data protection guidelines